An important decision was issued yesterday by the Anglican communion (represented by the senior bishops of its 38 provinces)concerning church unity and the redefinition of marriage. The Episcopal church USA had voted to depart from the traditional definition of marriage. The question was whether this would divide the Anglican communion, with each jurisdiction being allowed to do its own thing, or whether the bishops would call the Episcopal church USA to acknowledge the apostolically issued and ecumenically affirmed teaching on marriage. The bishops by a majority chose to do the latter. The statement, which is called “Addendum A,” copied below, removes the Episcopal Church USA from any ecumenical and interfaith bodies representing the Anglican Communion for a period of three years, as its views do not represent those of Anglican orthodoxy. In the official communique, the conference also issued a strong statement in support of human/civil rights and pastoral care toward LGBTQ identified people (the two paragraphs below Addendum A). Addendum B concerns another but related matter to which the Conference gave its attention: evangelism. Addendum B affirms the understanding of and commitment to evangelism through the explicit proclamation of the person and work of Jesus Christ. PSALT regards these statements as an instance where decision making has been done in the Church in the most inclusive way possible: the voice of the church Catholic (globally in the present age, and down through the ages) has been expressed. May God bless the Anglican communion as it seeks to live out these resolves in faithfulness and with compassion.

1.We gathered as Anglican Primates to pray and consider how we may preserve our unity in Christ given the ongoing deep differences that exist among us concerning our understanding of marriage.

2.Recent developments in the Episcopal Church with respect to a change in their Canon on marriage represent a fundamental departure from the faith and teaching held by the majority of our Provinces on the doctrine of marriage. Possible developments in other Provinces could further exacerbate this situation.

3.All of us acknowledge that these developments have caused further deep pain throughout our Communion.

4.The traditional doctrine of the church in view of the teaching of Scripture, upholds marriage as between a man and a woman in faithful, lifelong union. The majority of those gathered reaffirm this teaching.

5.In keeping with the consistent position of previous Primates’ meetings such unilateral actions on a matter of doctrine without Catholic unity is considered by many of us as a departure from the mutual accountability and interdependence implied through being in relationship with each other in the Anglican Communion.

6.Such actions further impair our communion and create a deeper mistrust between us. This results in significant distance between us and places huge strains on the functioning of the Instruments of Communion and the ways in which we express our historic and ongoing relationships.

7.It is our unanimous desire to walk together. However given the seriousness of these matters we formally acknowledge this distance by requiring that for a period of three years TEC no longer represent us on ecumenical and interfaith bodies, should not be appointed or elected to an internal standing committee and that while participating in the internal bodies of the Anglican Communion, they will not take part in decision making on any issues pertaining to doctrine or polity.

8.We have asked the ABC to appoint a Task Group to maintain conversation among ourselves with the intention of restoration of relationship, the rebuilding of mutual trust, healing the legacy of hurt, recognising the extent of our commonality and exploring our deep differences, ensuring they are held between us in the love and grace of Christ.

“The Primates condemned homophobic prejudice and violence and resolved to work together to offer pastoral care and loving service irrespective of sexual orientation. This conviction arises out of our discipleship of Jesus Christ. The Primates reaffirmed their rejection of criminal sanctions against same-sex attracted people.

The Primates recognise that the Christian church and within it the Anglican Communion have often acted in a way towards people on the basis of their sexual orientation that has caused deep hurt. Where this has happened they express their profound sorrow and affirm again that God’s love for every human being is the same, regardless of their sexuality, and that the church should never by its actions give any other impression.”

We, as Anglican Primates, affirm together that the Church of Jesus Christ lives to bear witness to the transforming love of God in the power of the Spirit throughout the world.

It is clear God’s world has never been in greater need of this resurrection love and we long to make it known.

We commit ourselves through evangelism to proclaim the person and work of Jesus Christ, unceasingly and authentically, inviting all to embrace the beauty and joy of the Gospel.

We rely entirely on the power of the Holy Spirit who gives us speech, brings new birth, leads us into the truth revealed in Christ Jesus thus building the church.

All disciples of Jesus Christ, by virtue of our baptism, are witnesses to and of Jesus in faith, hope and love.

We pledge ourselves together to pray, listen, love, suffer and sacrifice that the world may know that Jesus Christ is Lord. 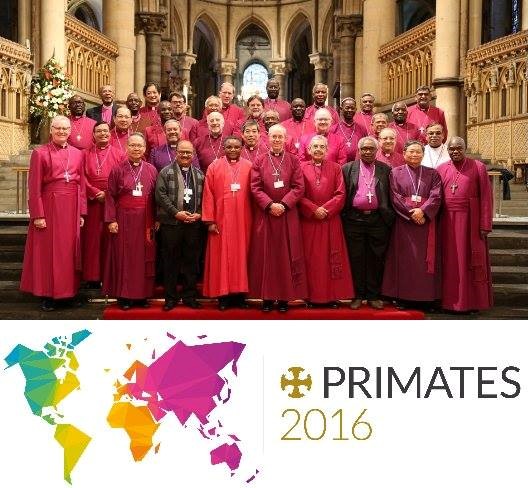 The Story of Rick

What Kind of Unity?